OpenSea is one of the most known marketplaces for NFTs. It was founded on December 20, 2017 by Devin Finzer and Alex Atallah in New York, and launched on the domain name OpenSea.io. The .io extension is the country extension for the British Indian Ocean Territory. It has become widely popular with technology companies but has also been the topic of scandals and faces uncertain future according to many.

The platform really became popular this year with the NFT popularity exploding globally – in February 2021 sales were equivalent to US $ 95 million, in March US $ 147 million and in September to US $ 2.75 billion.

The domain name OpenSea.com was originally registered in 2002. There was a recorded sale on Afternic in 2015, as a former asset of Marchex.

In October 2021 OpenSea.com was listed in a Sedo auction. The domain didn’t sell at the auction. What happened after that is not in the public domain, but what we can say for sure is that today OpenSea.com points to OpenSea.io.

NFTs and subsequently NFT marketplaces are very new as an industry, competition is fierce and it is hard to know for both, the creators and the fans, which ones will make it and which ones will fail. That makes it hard for brand owners to invest in their brands – how can you, if you don’t know if it will be there tomorrow. As with many other industries however, we are starting to see a trend – the ones who do make it, secure the global names exactly matching their brands. Look no further than the Bored Ape Yacht Club – they have both boredapeyachtclub.com and the famous acronym BAYC.com (I mean, try print the longer version on a baseball cap and you’ll figure why!).

With so many choices between compromise domains vs sticking with the most natural choice for audiences globally, by securing their exact brand match .com .domain OpenSea is sending a strong message to its customers, business partners and investors – they are here to stay. 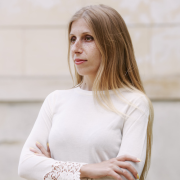 “If you are not a brand, you are a commodity” - Philip Kotler